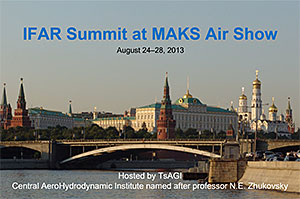 The 4th IFAR Summit 2013 was held in Moscow, from 24 to 28 August 2013, during the occasion of the International Aviation and Space Salon (MAKS).  Central AeroHydrodynamic Institute (TsAGI) hosted senior level representatives from 22 of the IFAR participating organizations.  Under the main theme of the summit and the accompanying events, ”Future of Aviation,“ the members evaluated the progress of IFAR work and decided on their future activities.

IFAR members discussed their technical collaboration in several areas of importance to the global civil aviation community, including the impact of aviation on the environment and the use of alternative aviation fuels.  The summit highlighted the results achieved by the alternative aviation fuels working group and its decision on further activities as a new joint flight research campaign in the next year. Based on the current refining of IFAR´s focus areas the summit launched the collaboration on enhancing air transportation system performance.  In the fields of air transport efficiency related to climate change and noise, the members decided to continue to consider their common interests and to focus on specific topics, such as climate research.  During a separate IFAR Café session on the future of aviation and mobility, IFAR members were able to discuss related questions in a new format.

A new web-based communication and database platform, IFARlink (www.ifarlink.aero), has been established for exclusive use by IFAR members.  It will support the exchange of information and further improvement of IFAR technology databases.  It will also facilitate the initiative on exchange of education and promotion of young IFAR scientists and engineers where concrete activities will be identified by a specific task force in the coming months.

The Summit welcomed the nomination of one new member from Austria. IFAR now connects 24 aviation research organizations with about 35,000 researchers in aviation worldwide.

The members nominated their new IFAR Chair and Vice-Chair for the next two years. Dr. J. Shin, NASA, former IFAR Vice-Chair, now serves as IFAR Chair. Dr. K. Nakahashi, JAXA, was elected as new IFAR Vice-Chair.  The Summit thanked the founding IFAR Chair, Prof. J. Szodruch, for his valuable contributions to IFAR.  Professor Szodruch is now acting as member of the IFAR Leadership Team, which consists of the Chair, Vice-Chair and Past Chair.

IFAR initiated the inaugural conference of young researchers from 25-26 August.  Participants from six IFAR member countries exchanged their views on the social and scientific aspects of careers in the field of aeronautics research. (see link “Conference of IFAR Young Researchers”)

IFAR members participated in the AeroSpace Technologies of the XXI Century (ASTEC) international scientific symposium co-hosted by TsAGI.   ASTEC also focused on the challenges facing aviation in the future. This symposium was attended by more than 200 guests including representatives from Russian research institutions, industry and government.  Presentations (link)

During a visit to the MAKS the IFAR representatives met with the Prime Minister of the Russian Federation, Dmitriy Medvedev, at the TsAGI exposition hall.   The Prime Minister was informed about the vision and main objectives of IFAR and its great potential for international cooperation in aviation research.

The outcomes of this Summit were summarized in a declaration. 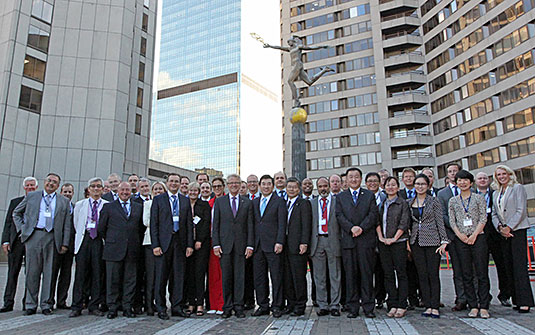 The following countries and organizations participated in the Moscow Summit 2013: 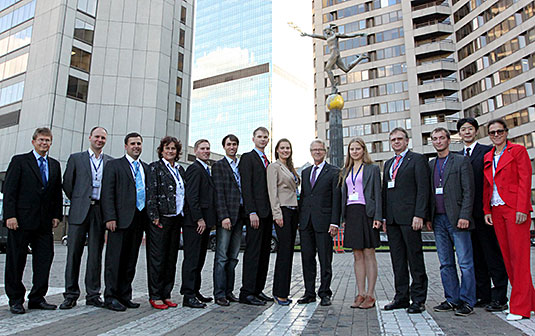